The ancient city of Petra – Jordan

The ancient Nabatean city of Petra certainly deserves to be called one of the wonders of the world and be on the UNESCO World Heritage Site list. The rose-hued cliff, mountain, wadi and canyon wonderland lay forgotten for centuries. It was known only to the local Bedouins and it wasn’t until the Swiss explorer Jean Louis Burckhardt went undercover in search of the ancient city in 1812, that it became known to the rest of the world.

Entering the city through the Siq, you meander through the 1.2km long narrow passage between tall vertical cliffs. A magical corridor opening up to the infamous, powerful and grand Treasury (Al-Khazneh) meticulously carved out of the mountainside. The Treasury is the main reason people know of and come to Petra, but this place is so much more. Beyond the Treasury the city extends far and wide into the windblown rocky and dry landscape, with an impressive number of hidden tombs and caves carved into the cliffs. I loved imagining what this place was like in its heyday, with some 30,000 inhabitants living up in the mountains and the bustling city centre.

The Nabateans were a nomadic tribe from western Arabia that arrived in the region in the 6th century BC. The capital city of Petra became an important trade and commerce centre and remained so for hundreds of years. As the Nabatean empire weakened in the 2nd century AD it was taken over by the Romans who added a Roman touch to some of the structures. After earthquakes in the 4th and 6th centuries AD that destroyed some of the impressively engineered and also vital water management systems the city was mostly abandoned. The ‘lost city’ known only to the local Bedouin tribes. 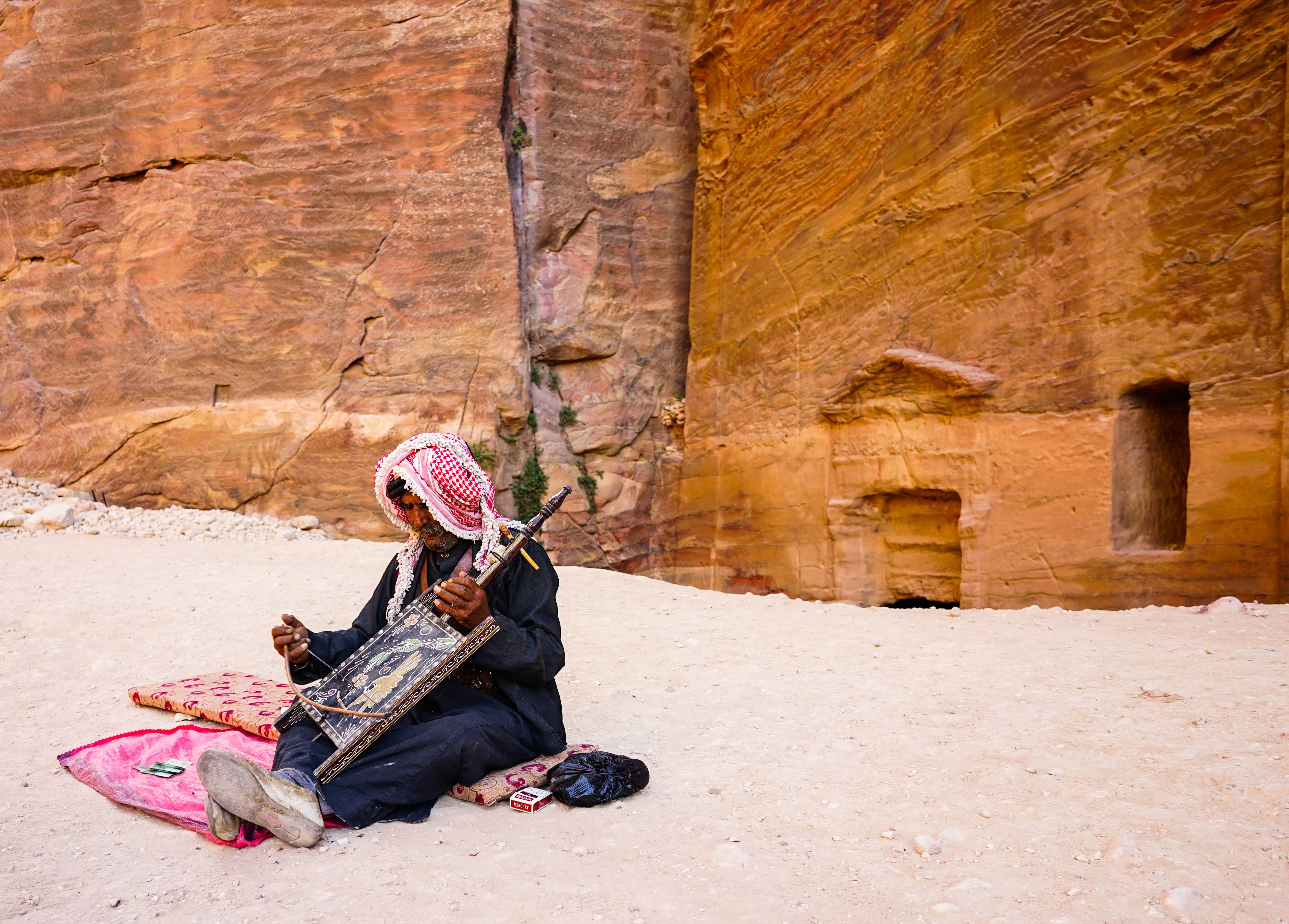 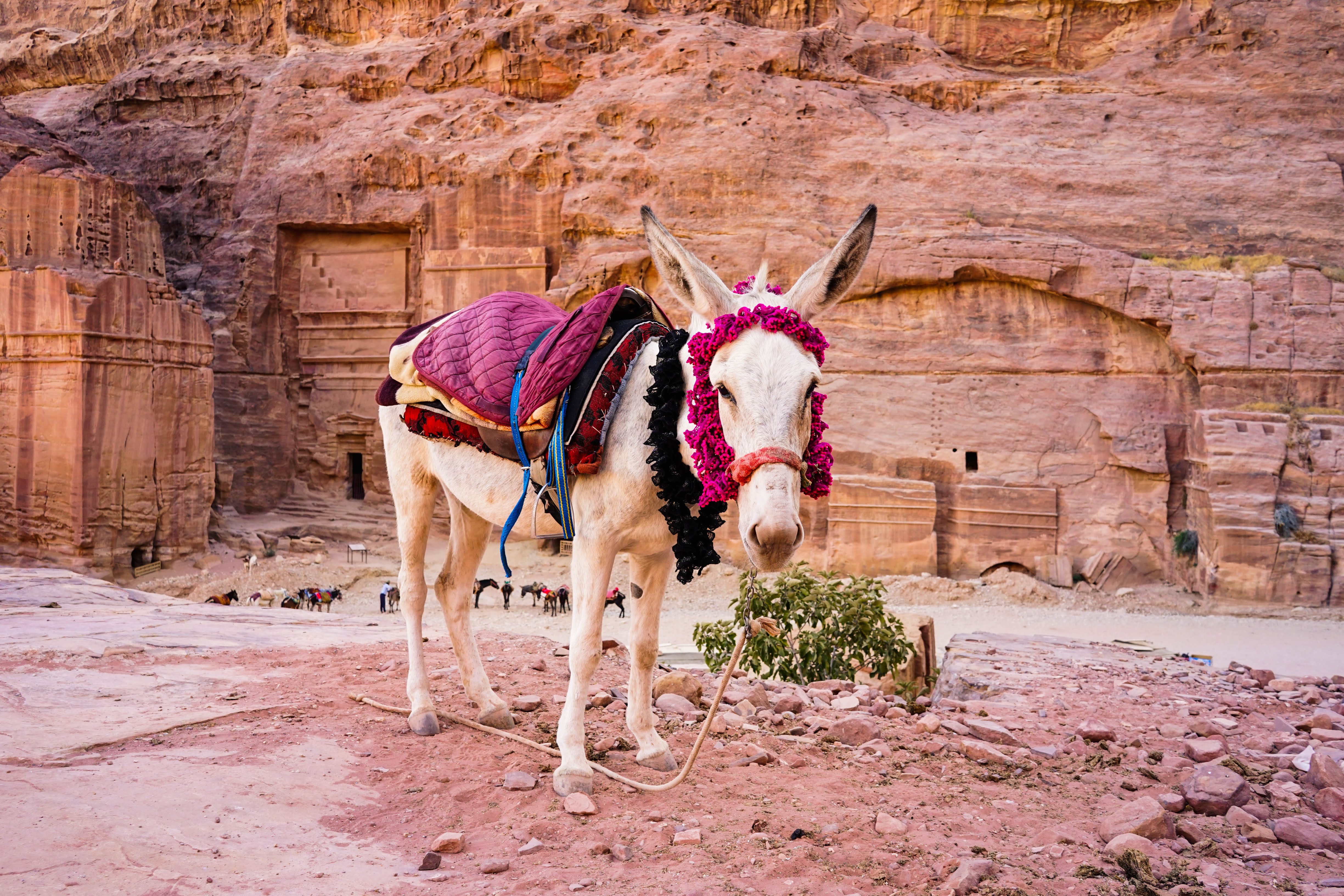 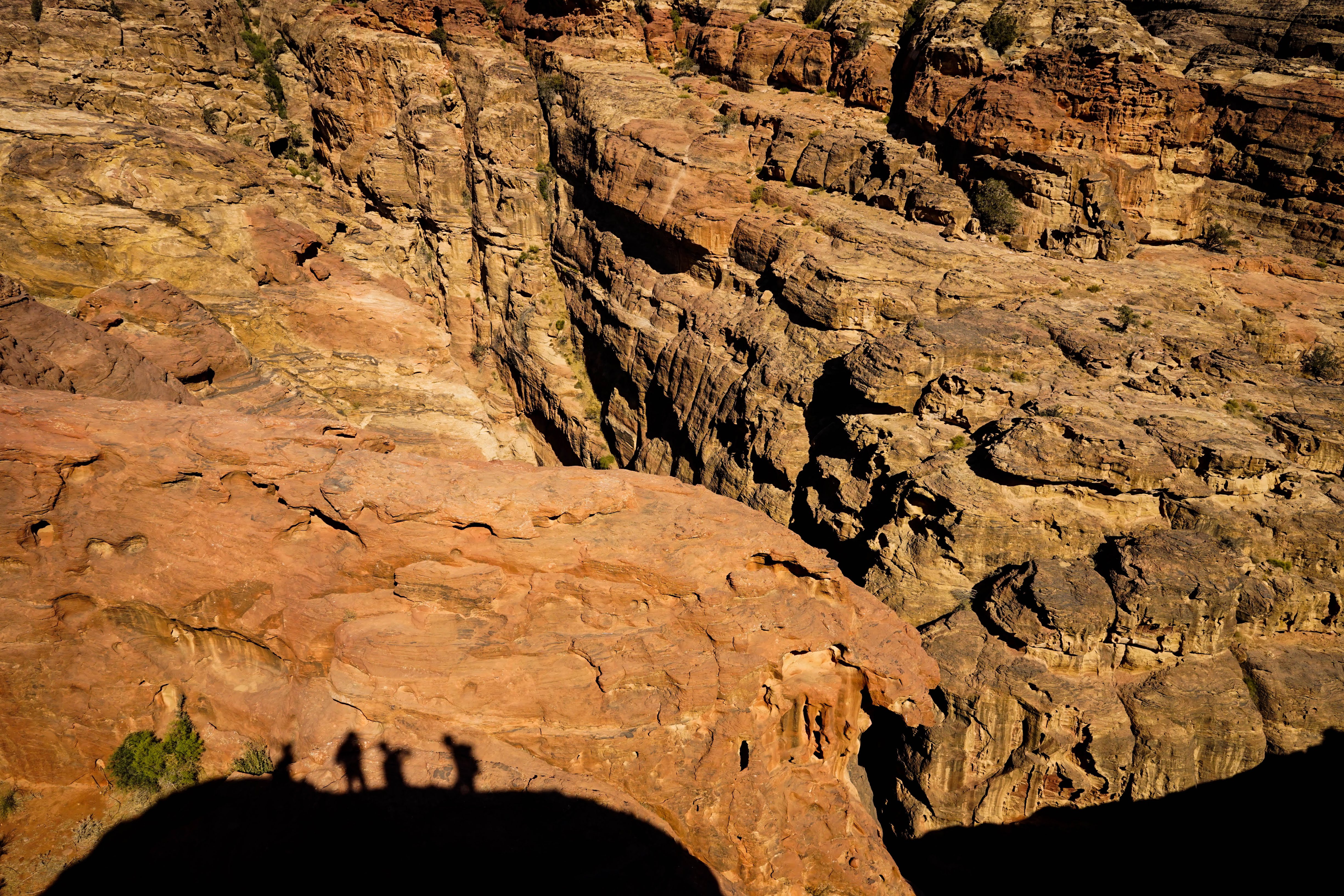 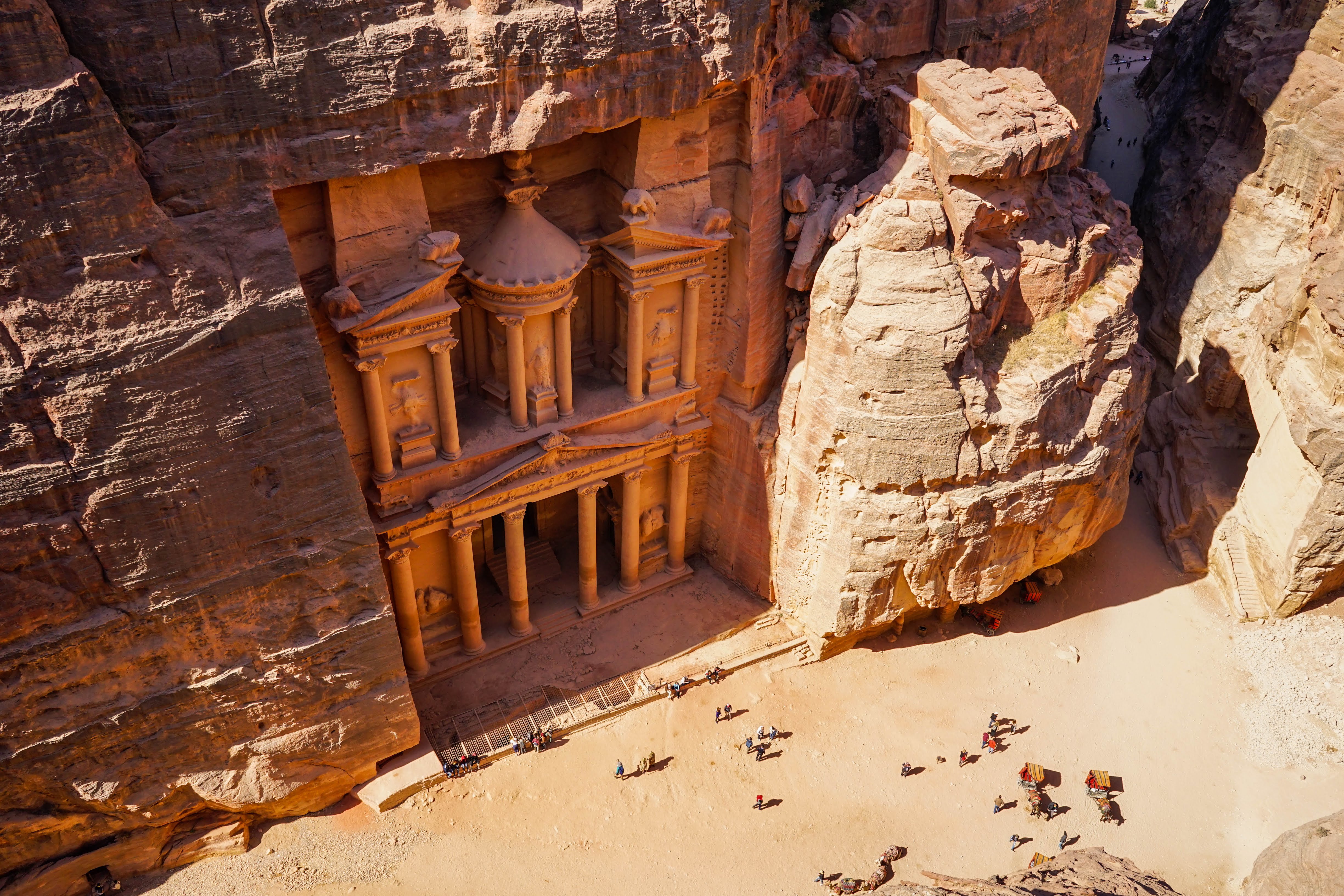 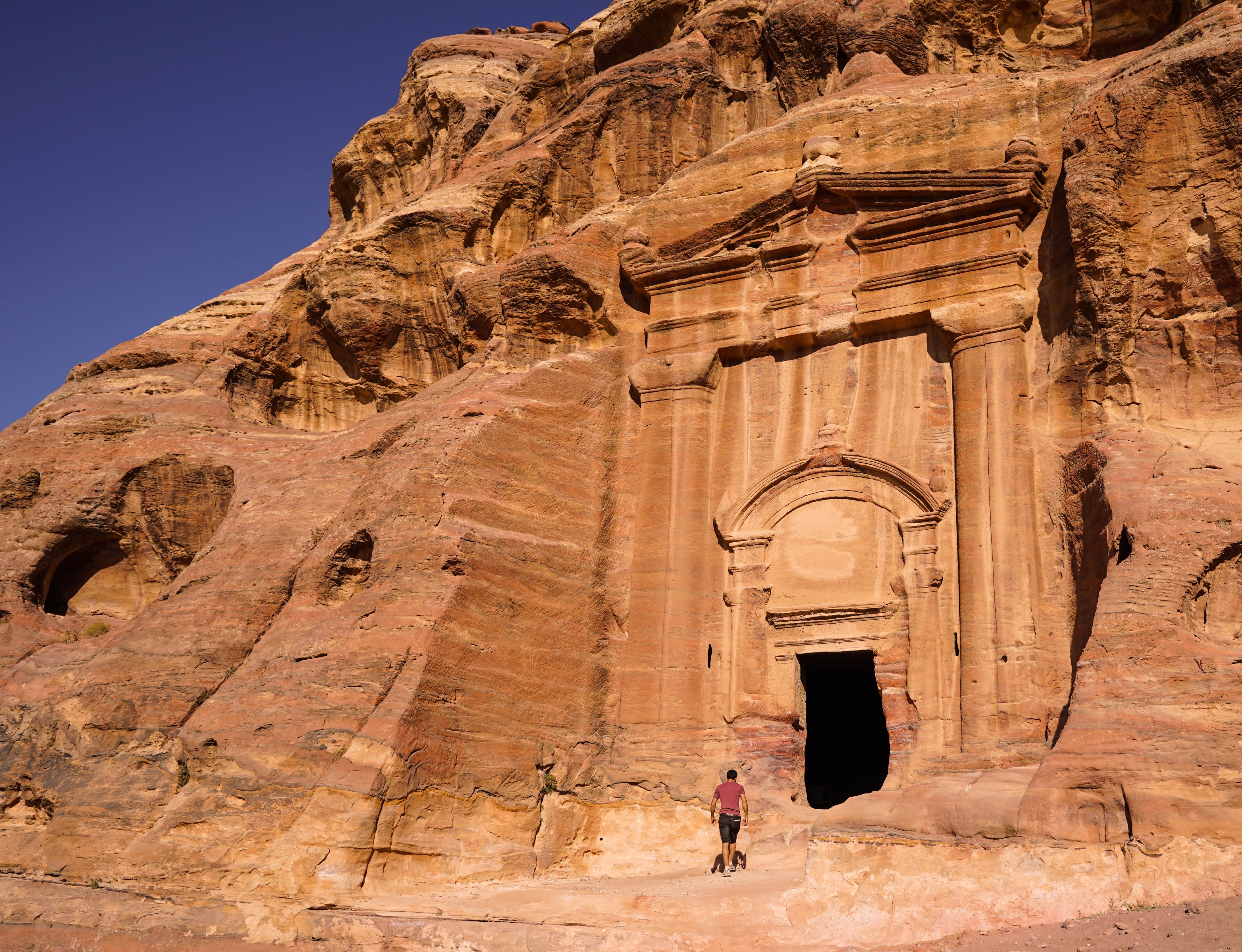 With the other three members of our ‘Fantastic Four’ I explored the city highlights over two days, and on the third ventured into less known territory, scrambling up the rocks in search of adventure and at one point ended up in a canyon where we probably should have been using ropes to descend some of the steep sections. Even though we covered almost 60km on foot over those days, there were still many areas that were left unexplored. 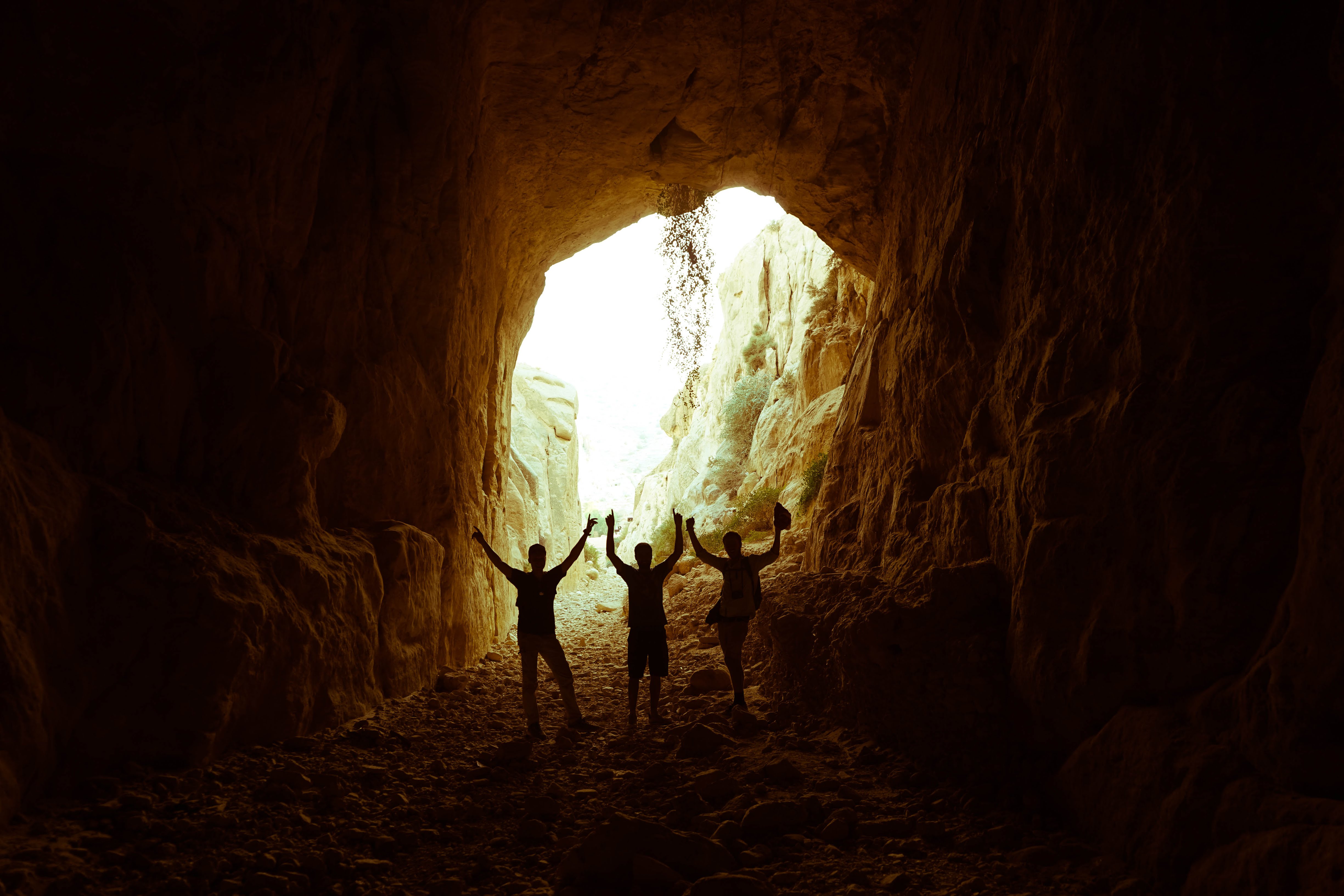 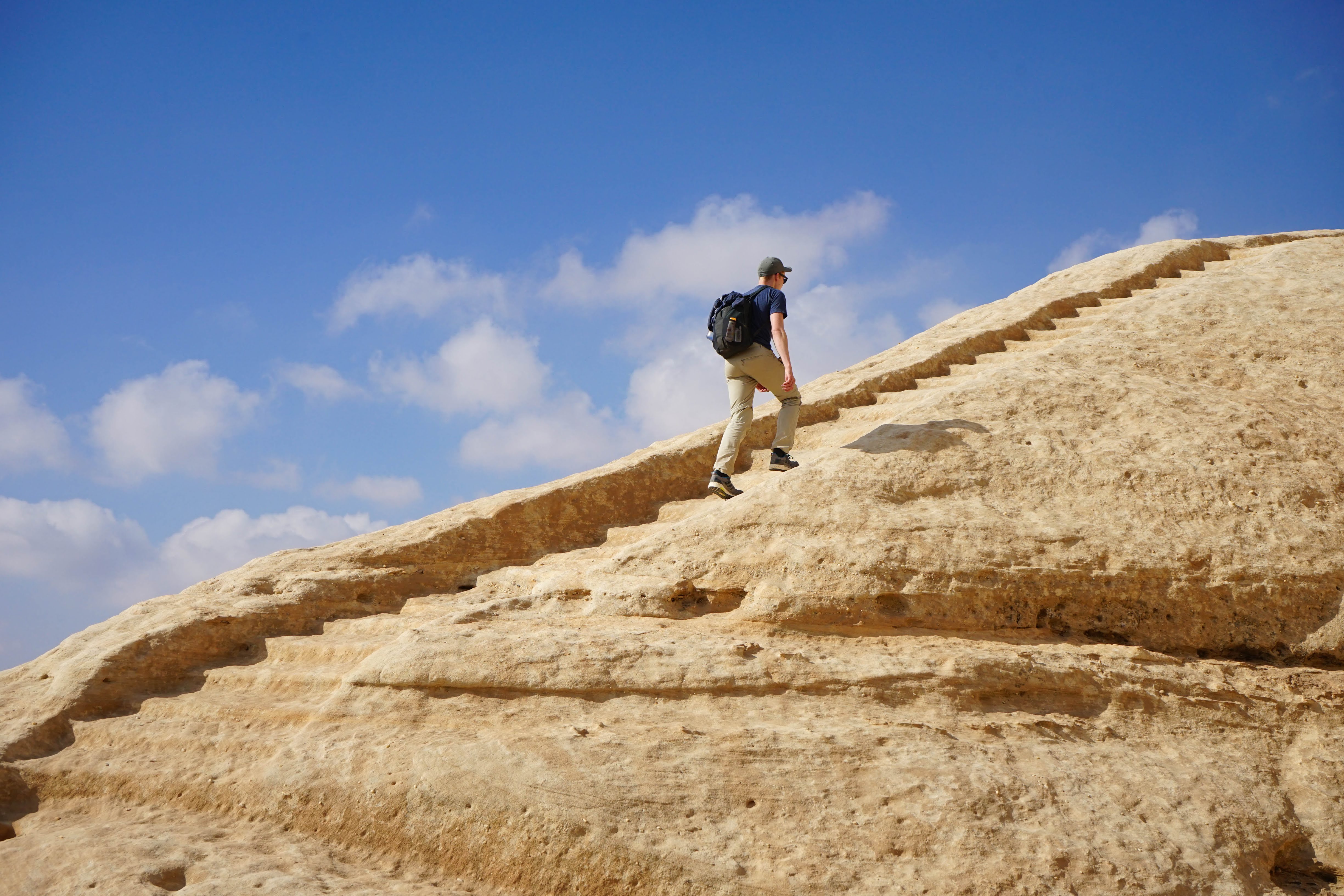 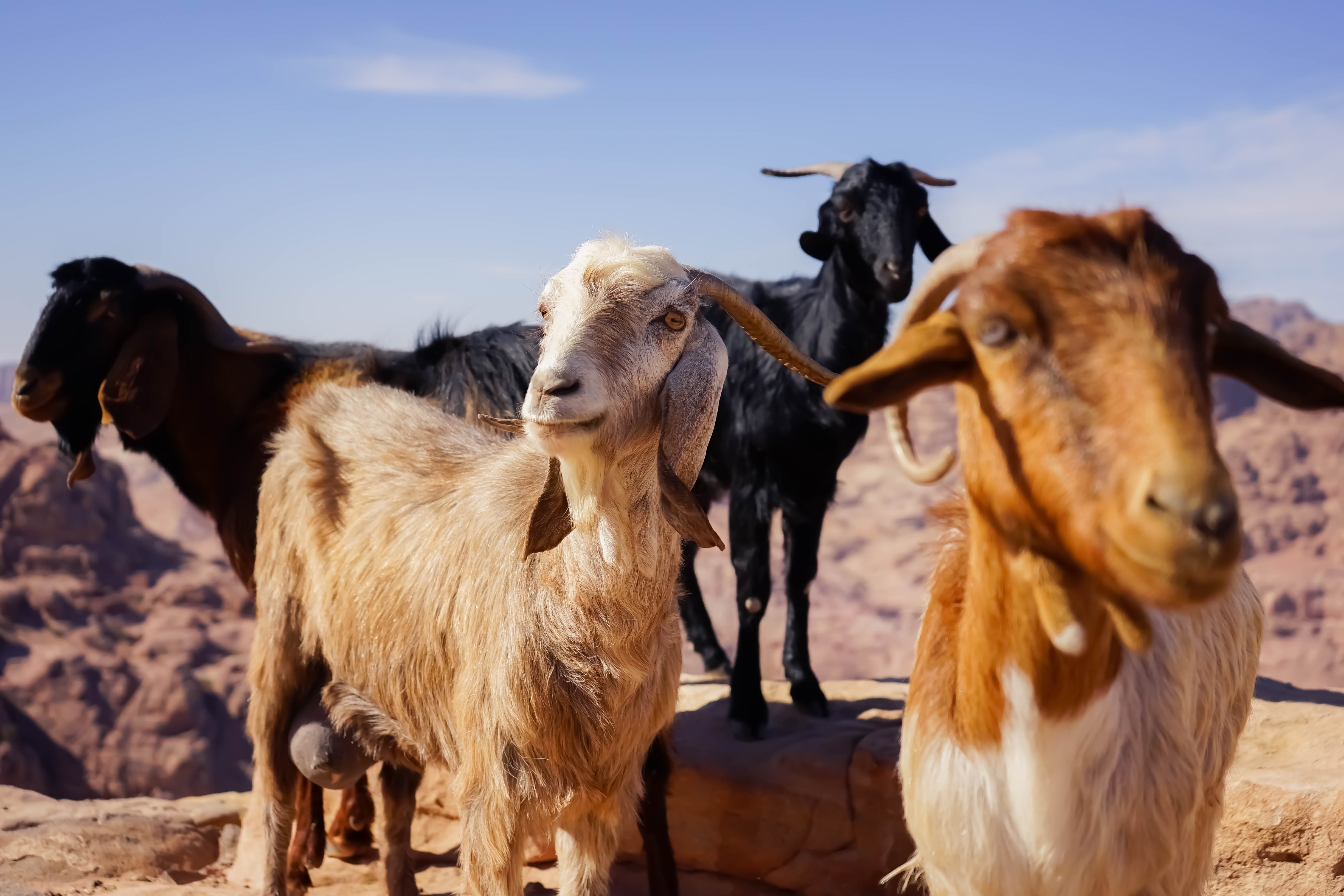 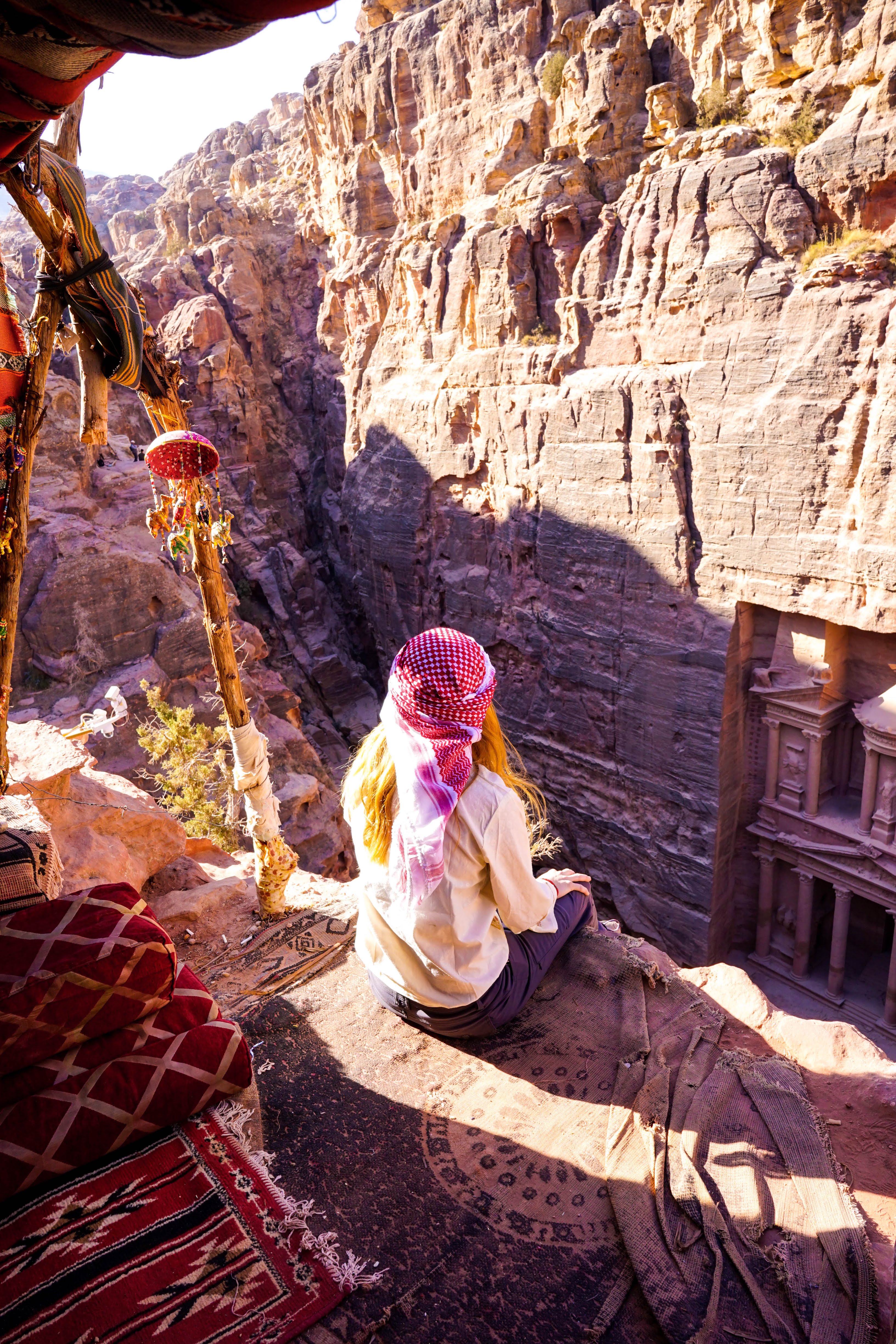 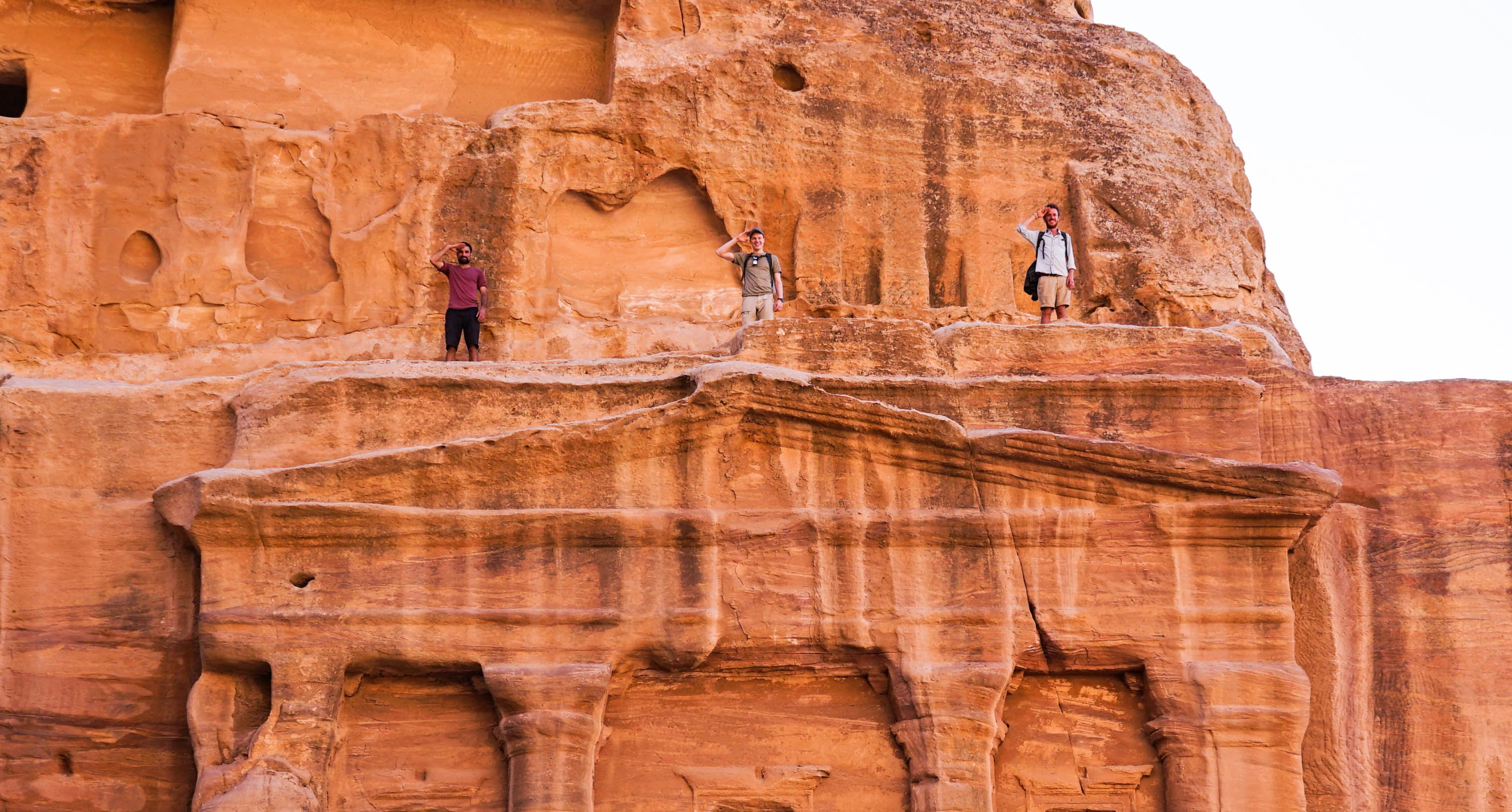 Some Bedouin still live in and among the cliffs and bumping into a cheery goat herder or some local children who can help you navigate a tricky path certainly contributes to the experience. A definite highlight of the trip was being invited back to one of the Bedouin tea houses overlooking the Treasury for the ‘Petra by Night’ show. We drank copious amounts of Bedouin tea, tucked into the most amazing fire-cooked chicken and vegetable meal with our bare hands and were entertained by the eccentric and quirky Captain-Jack-Sparrow-lookalike Bedouin. With a flick of his black curly shoulder-length hair and ash flying through the air from his cigarette/joint he told stories with a cheeky glint in his coal-painted eyes. Stories that I wasn’t quite sure if I should completely believe or not, and obscure riddles we never got the answer to. When the show started we quietly crawled to the edge of the cliff, laid on our stomachs and peered down into the canyon.

Any visit to Jordan must have a visit to Petra on the itinerary. It is mysterious, beautiful, unique and so much fun!

See my other posts from Jordan here:

MORE IN WANDERLUST OF DILL

This is a text widget. The Text Widget allows you to add text or HTML to your sidebar. You can use a text widget to display text, links, images, HTML, or a combination of these. Edit them in the Widget section of the Customizer.
%d bloggers like this: